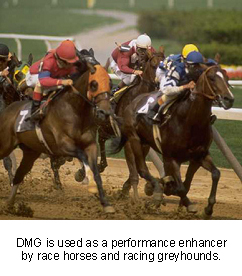 Dimethylglycine is a highly unusual supplement, in that it is extremely popular despite the fact that all of its touted effects have largely been refuted by clinical and laboratory testing. It is most widely used as a performance enhancer by athletes, and in dogs and horses that are bred for racing purposes. Specifically, DMG is thought to be able to reduce lactic acid build up that might otherwise contribute to muscle fatigue. There is no immediately obvious reason why DMG should be able to achieve this, given its role in the body as a metabolite of betaine and a source of glycine. Reports of an ability of DMG to enhance athletic performance first appeared in the popular literature in the 1980's. Controlled studies involving treadmill horses, male athletes, and patients prone to lactic acid build up due to a cytochrome oxidase deficiency fail to support these earlier claims. Other common uses of DMG which have been refuted by clinical research include the treatment of autism and idiopathic epilepsy.

"...all of its touted effects have largely been refuted by clinical and laboratory testing."

DMG is also touted as an immune stimulant, although it has no role in the body that could directly account for this effect. A double blind study in the early 1980's showed increased immune function (both humoral and cell-mediated) in humans following supplementation with DMG. Another study suggested this increased immune response could translate into a protective effect against cancer. A comprehensive study in 1992 failed to demonstrate any immune enhancing properties of DMG in cats. 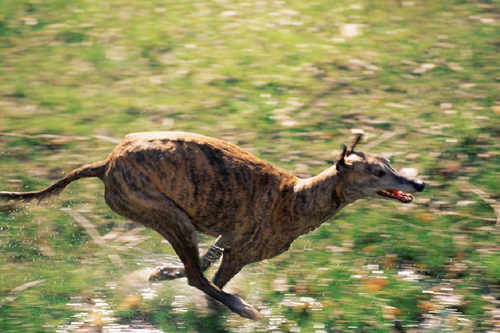 What is the function of DMG?

DMG is a metabolite of betaine, which is used to help promote the production of methionine from homocysteine. Abnormal homocysteine levels are associated with autism and with coronary artery disease, but DMG does not stimulate reactions that reduce homocysteine, but is a by-product of them. DMG may also eventually be converted into two very vital compounds, phosphatidylserine and glutathione, but a direct effect has not been demonstrated. Indeed, in one study, DMG supplementation actually reduced glutathione levels.

"DMG does appear to function as an antioxidant, and has been shown to have a protective effect against gastric ulceration."

DMG does appear to function as an antioxidant, and has been shown to have a protective effect against gastric ulceration.

Why recommend the administration of DMG to my pet?

Despite the lack of supportive research, DMG is used to enhance athletic performance in dogs and horses. It may also function as an antioxidant, and be of some benefit in reducing inflammation. DMG may also be recommended for the treatment of immune deficiency disorders, cancer, epilepsy and cognitive disorders, although research support for these uses is lacking.

How much experience is there with the use of DMG in pets?

DMG has been used for over 20 years in humans, racing dogs and horses. While not necessarily clinically effective, DMG is at least extremely well tolerated and very safe, which is not surprising given that it is a metabolite already present in the body. No toxicity has been reported to DMG supplementation. It is important to note that practitioners who use DMG are convinced of its efficacy, and report positive clinical outcomes, despite the lack of research support.

Where do I get DMG and do I need a prescription?

Pet owners are cautioned against buying supplements without knowledge of the manufacturer, as supplements are not highly regulated and some supplements may not contain the labelled amount of ingredients. Your veterinarian may have preferred supplements that he or she will recommend. A prescription is not needed for DMG.

© Copyright 2009 Lifelearn Inc. Used and/or modified with permission under license.